Redesigning Mechanical Sounds for a Call of Duty Cutscene

Take a tour through a big ol' Reaper session with me. We're going to talk about noisy exoskeleton suits.

My passion for sound doesn't fall squarely into what I would consider the hyper-realistic / Hollywood style action sequences of a franchise like Call of Duty. I'm most fond of softer, more playful sound design like that found in Ooblets, Stardew Valley or Celeste.

On the other hand, there's a lot of value in exploring sound cues outside of my comfort zone. Enter: Serban Matei, a community member from the Blipsounds Discord server. He issued a challenge to some folks in our #sound-design channel, and after watching some truly impressive submissions come back, I just had to give it a shot.

The final video is at the bottom of this post, but if you're curious, keep reading to learn about some of the techniques I used while working through this exercise.

I knew right away that I needed some kind sound for our character struggling against the malfunctioning exoskeleton. This would be act 1 of our cue.

After a bit of scheming, I wound up using a contact mic to record the grinder I use to make coffee (warning 😬 loud):

These sounds were then EQ'd, pitched shifted, saturated, and also received some unique modulation + automation. I opted to use Reaper's in-built LFOs to automatically move certain plugin parameters in a random, jittering pattern:

I also used more drastic + deliberate pitch shifting on the individual media items themselves (pictured above) to create more drama as our character pulls against the locked-up exo-suit.

It's all in my head

Stereo placement was an important consideration in helping the sounds feel grounded. Given the first-person perspective, I reached for panning automation to graduallly draw sounds from the right towards the center channel. This is done in sync with our character's arm movements.

Similar movements were used during suit unlock and when the chassis falls to the floor.

For the second act of the cue, I knew precise timing would be important. Once our hero performs some tap-taps on his arm-mounted iPhone of Death, the suit begins to release it's many latches and clasps. For this portion of the sound, the number of unique sources jumps up significantly. 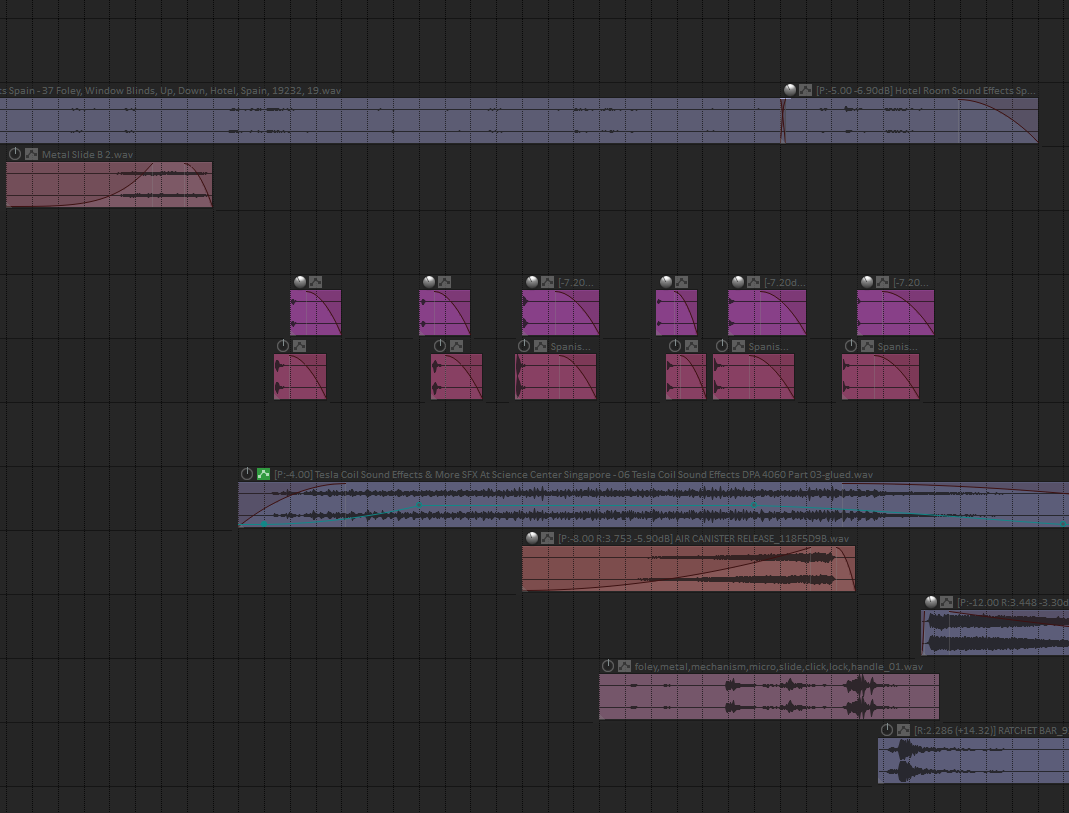 Here, I brought together recordings of light switches, gate latches, and more of the coffee grinder. Using the envelope-follower in SoundToys' FilterFreak, I cranked the resonance to create satisfying beeps, then layered them with the more tactile sounds.

A bit of electronic interference was also peppered in for good measure. Huge shoutout to Free To Use Sounds for their recordings of Tesla Coils @ the Science Center in Singapore.

The final act this cue sees our hero escaping from the exoskeleton as it clatters to the ground. I wanted to create a sense of triumph, and let the sound tell this story, but wasn't sure how to pull it off.

After seeking advice from The Internet (like you do), Travis Nass had the great idea of creating what he called a "We're In!" moment. Think: heist movies and safe cracking scenes. He proposed a satisfying cha-thunk to sell the idea that our character's struggle has paid off, without having to resort to dramatic hits or an ill-fitting musical cue.

Using some air canister discharges as tension & release, I tucked a couple of metal latching sounds between them to create a satisfying climax to the scene.

NI's Transient Master also did some heavy lifting here, really helping to emphasize the metallic transients in the latching sounds.

And now, allow me to hand-wave away the aspects of the cue I didn't cover, and present to you the final redesign!

At the end of the day, it's a pretty short clip, but I'm happy I dove into this project and discovered more about the work that goes into creating grounded, realistic scenes:

If you have any questions about the process, or are curious about any of the sounds I didn't cover in the write-up, feel free to DM me on Twitter.

Thanks so much for reading!